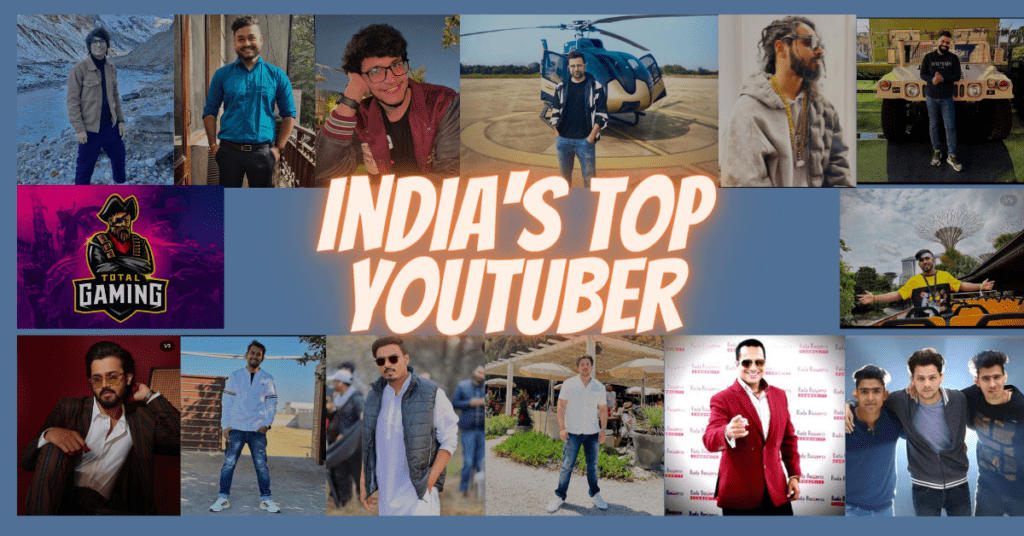 Your search for India Top Youtuber in 2023 is over now. Here, We provided a list of top YouTubers in India in 2023. India has a vast community of YouTubers who offer different kinds of content like comedy, short videos, standup comedy, tech videos, reviews, and many more are there in the list.

We all love these Youtubers who take smiles on our faces. So, Let’s Jump Into the List of India Top YouTubers in 2023.

After deep research, we have made this List of India’s top YouTubers in 2023 with the most subscribers as of January 2023.

YouTube is a terrific place to start if you want to watch a music video, pick up a new skill, or just pass the time. Many creators have developed followings and subscriber bases for their channels, with some reaching millions. Let’s briefly talk about India’s top YouTuber. 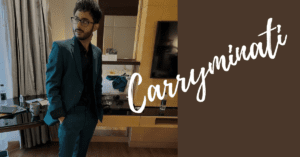 CarryMinati is the top YouTuber in India

Ajey Nagar, Popularly known as Carryminati is from Faridabad, Haryana. He was born on 12th June 1999 and education-wise Ajey left DPS, Faridabad for college after completing his high school studies in the arts stream. Later, he completed his 12th grade through online learning. “STeaLThFeArzZ,” his first YouTube channel, was launched in December 2010. There were videos on that channel about football tricks, tech tutorials, and gameplay videos. However, it was unsuccessful and in vain. Then he launched a second channel, which he initially dubbed “Carrydeol” but eventually changed to “CarryMinati.” ……Read More

CarryMinati is the top YouTuber in India as of January 2023, and he is rising to the pinnacle of success. 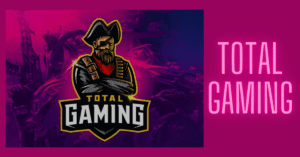 Ajay, also known as Total Gaming (sometimes referred to as Ajju Bhai) online, is an Indian YouTuber who plays the battle royal game Garena Free Fire. He is the most popular Indian YouTuber for gaming. Ajay was born in Gujarat’s Ahmedabad. He failed his 12th and received his diploma. Although he has the most subscribers of any gaming YouTuber in India, he works as a software engineer, a freelancer, and a “growth hacker” and is thought to be based in Surat, Gujarat. …..Read More 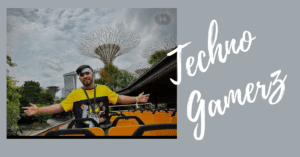 One of India’s most popular gaming YouTubers is Ujjwal Churasia (born January 12, 2002 ), better known online as Techno Gamerz. His GTA V series is what made him most famous.

On August 13, 2017, Ujjwal launched his channel, where he primarily shared gaming tutorial videos. On January 6, 2019, he got 100k subscribers on his channel.

With over 31 million subscribers, Ujjwal is regarded as the YouTube channel with the quickest growth in India. Being the third-largest Indian gamer to surpass 1 billion views, he recently achieved history. …….Read More 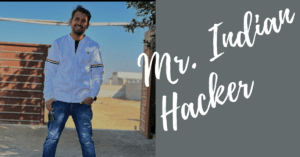 Dilraj Singh Rawat, also known online as Mr. Indian Hacker is an Indian educational YouTuber who uploads experiments. He was born on January 8, 1996 in Ajmer.

Instead of seeking degrees based on theoretical understanding, he was more interested in expanding his practical expertise. He had no prior knowledge of being a YouTuber at the time. As his YouTube career progressed, he acquired the skills necessary to produce expert films and conduct tests securely. Although he has five high-end cameras, he only uses one of them for his videos. He always records audio with a collar-hung microphone. He refers to his followers as the “Titanium Army,” and the disclaimers in his videos read, “We have titanium in our blood!” 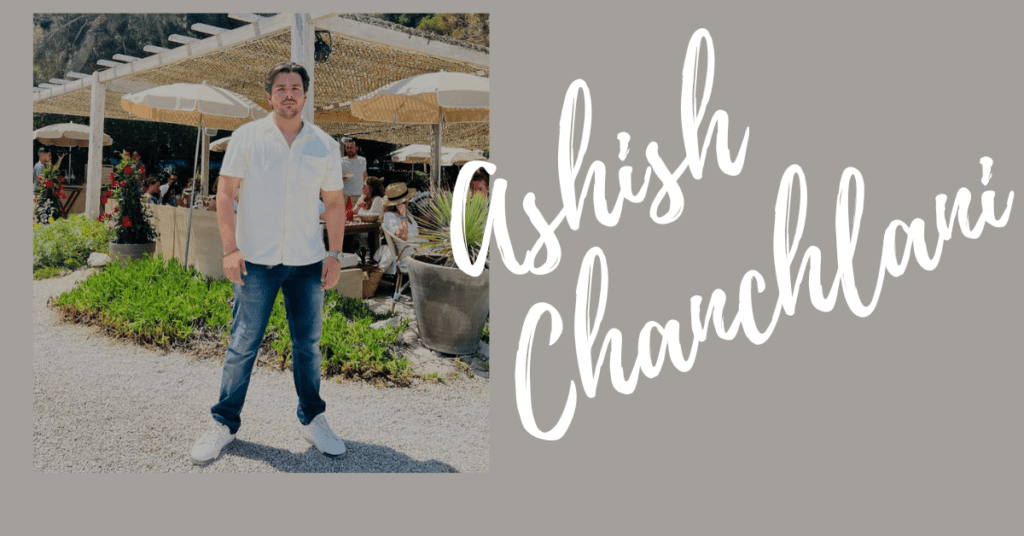 Ashish Chanchlani, an Indian YouTuber and comedian, was born on December 7, 1993. In 2016, Ashish make his television debut on the hit programme Pyaar Tune Kya Kiya. His acting earned him a lot of admiration. Shahid Kapoor, Akshay Kumar, Kartik Aryan, and many more well-known Indian actors have also been in touch with him to promote their films on a number of occasions. ….Read More 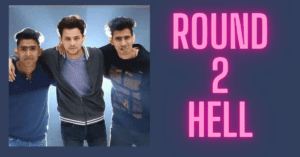 Wasim Ahmad, Nazim Ahmed, and Zayn Saifi are friends who manage the community YouTube channel Round2hell. Since their time in college, the three of them have been friends. Zayn left Zakir Hussain College after putting in the maximum study time. Wasim and Nazim attended Alam College and Modern Public School, respectively, for their final year of high school education.

They began to gain popularity soon after their 15th video, which was based on the March 31, 2017, incident when it was rumored that the Indian telecom provider Jio would be shut down, went viral. 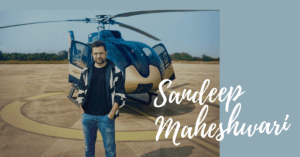 At the age of 19, Maheshwari began his career as a model, but he was forced to end it due to abuse and exploitation. He founded Mash Audio Visuals Pvt. Ltd. and began creating model portfolios with the goal of assisting several models. He founded a second unnamed company in 2002, but it failed after only six months. He launched ImagesBazaar in 2006.

Even after experiencing so many business failures, he persisted. He began holding sessions with his visitors at his little institution in February 2012, recording them with less expensive cameras, and uploading them to YouTube. He had more than 1000 subscribers by November 2012. He began performing in larger venues, and by March 2013, he had 12000 subscribers. He had more than 30,000 subscribers by the end of 2013. His method of creating videos hasn’t changed at all since then. Up until April 2019, when he eventually reached 10 million subscribers, this number continued to rise. 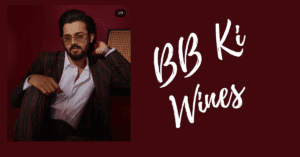 Bhuvan Bam, better known online as BB Ki Vines, is an Indian YouTuber, musician, and stage performer. He was born on January 22, 1994.

The majority of the videos feature the many people in Bhuvan’s life, including his incredibly sensitive mother who breaks down in tears at the slightest provocation and his heavily tech-illiterate father. There are many series as well, including Dr. Sehgal, Sameer Fuddi, and Angry Masterji (Angry Teacher).

He portrays talks amongst various individuals in his videos by dressing up like them, including women. There is just one character each frame because there isn’t yet a single video that shows two characters in the same frame simultaneously. He occasionally overlaps the voice when switching from one character to another to create the impression of a discussion. ….Read More 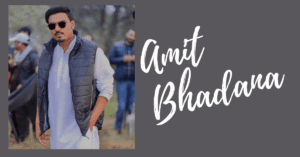 Amit was born on September 7, 1994 in Faridabad, India,. He was born into a Gurjar family in the North Indian hamlet of Johripur. He attended Yamuna Vihar School for his high school education and holds a degree in law. Amit is 65 kg (approximately 5 feet 7 inches) tall and weighs 65 kg.

Amit Bhadana is an Indian comedian and YouTube star who first gained fame when his cover of Adele’s song “Hello” went viral on social media. He made another dubbing video on Eminem after his first popular one, and that one also gained a lot of traction. ….Read More 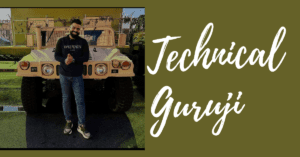 Engineer and YouTuber Gaurav Chaudhary, sometimes known online as Technical Guruji, is from India. He is renowned for creating Hindi-language technology-related YouTube videos.

In 1991, Chaudhary was born in Ajmer, Rajasthan. In the eleventh grade, he took a C++ coding course at a Kendriya Vidyalaya. He relocated to Dubai in 2012 to enroll in BITS Pilani-microelectronics Dubai’s programme. He created a YouTube channel in addition to his job while he was in Dubai, where he acquired a certification from the Dubai police to work with security systems. In October 2015, Chaudhary began his Technical Guruji channel, where he mostly shared advise and product evaluations. The channel immediately gained popularity, and in 2017 Chaudhary started a second channel where he would post videos about his personal life. ………Read More 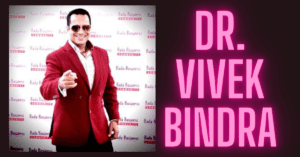 Vivek Bindra is an Indian entrepreneur and instructional YouTuber who posts videos on business and motivational topics. He was born on April 4, 1978.

On December 6, 2013, Bindra launched his YouTube channel and, as previously announced, began posting motivational videos. After a few years of producing in this genre, he switched to making business strategy films because his first brand from 2011 had given him business knowledge. He began earning enormous fame in the middle of 2018 as a result of his highly influential videos.

Bindra attended a brief podcast event hosted by Indian YouTuber BeerBiceps after TikTok and 58 other Chinese applications were subsequently banned in India by the government. He expressed his opinions regarding the incident and talked about the controversy it had caused among TikTok users. Given that most TikTok users took his statement on the situation as consolation, it is thought that it significantly contributed to cooling down the internet riot. …….Read More 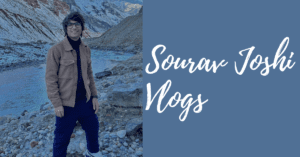 On September 8, 1999, Saurav Joshi was born in Dehradun, Uttarakhand, India. Saurav is a Uttarakhand native.

He completed his elementary education in Haryana before enrolling in a Bachelor of Fine Arts programme, in which he excelled. In terms of his family, he has a mother, a father, and a younger brother named Sahil Joshi.

Saurav Joshi’s art channel, Sourav Joshi Arts, is where he posts videos of his paintings. And on July 24, 2017, the first video was posted to this channel.

Additionally, he launched a second YouTube channel. Sourav’s vlog channel is where he posts daily videos that have made him popular. 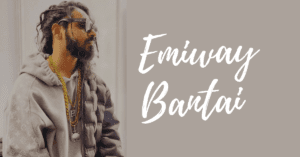 Hip-hop rap artist Bilal Shaikh, also known online as Emiway Bantai (born November 13, 1995), is from India. His pen name is a combination of Lil Wayne and Eminem, two rappers. He developed the name Bantai while borrowing the letters “Emi” and “Way” from Lil Wayne and Eminem, respectively.

In order to support himself financially during his early years as a rapper, he worked as a helper at the “Hard Rock Cafe.” He has never solicited assistance from his family for his rap musical endeavors. He initially began rapping in English, but on the advice of his father, he switched to Hindi so that more Indians could relate to his lyrics. In 2014, Bantai released “Aur Bantai,” his debut Hindi rap, which became a sensation right away. 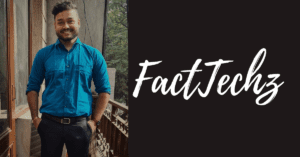 He simultaneously posted his image of the golden and silver play buttons. He didn’t specify why, but he stated that he didn’t want his name to be made public. He presently posts hilarious facecam films with editing and effects. At the age of 19, Rajesh Kumar is the youngest Indian YouTuber to reach 10 million subscribers. He was among the top YouTube content creators in India in 2017.

Short educational videos were also posted by FactTechz on TikTok; the most recent of these was uploaded on May 13, 2020, just a month before TikTok was outlawed in India due to privacy concerns.

Nischay Malhan, best known online as Triggered Insaan (born November 14, 1995), is a Delhi-based Indian YouTuber noted for his commentary, roasts, rants, and reaction videos on his YouTube channel, frequently focusing on Bollywood and Indian media as well as social media celebrities. Additionally, he has a gaming channel called Live Insaan where he posts videos of games like Minecraft, GTA, and, in the past, Getting Over It with Bennett Foddy.

Because his name Nischay translates as surity in English, he first called his channel Yes-Yes-Bhai before settling on the name Triggered Insaan. He then changed the name of the channel twice, first to Its Nischay and then to Triggered Insaan, to ensure that it could be spoken properly.

Life is too short. Nobody Knows what’s gonna happen last moment. So, You should do whatever you like or whatever you want in your Life. Achieve Your Goals for yourself.

The above list of “India Top YouTuber” show the same thing. These are the people from different backgrounds who came on Youtube to do something big. They had a dream of something big and now that is part of their life.

So, We hope that you like our article and we would love to know in the comments who is your favorite Youtuber from the above list of “India Top Youtuber“.

Who is India’s Top YouTuber?

CarryMinati is the No. One and India’s Top Youtuber.

Who is richest YouTuber in India?

Technical Guruji aka Gaurav Chaudhary is the richest Youtuber with net worth of 45 Million USD.

Which YouTuber is very rich in India?

Technical Guruji aka Gaurav Chaudhary is the richest Youtuber with net worth of 45 Million USD.

Who is India’s most favorite YouTuber?

CarryMinati is the most favorite Youtuber in India.

Who is the first YouTuber?

Jawed Karim was the first YouTuber.